Skip to content
Another Oklahoma Police Officer Charged, Not Charged, Then Charged Again 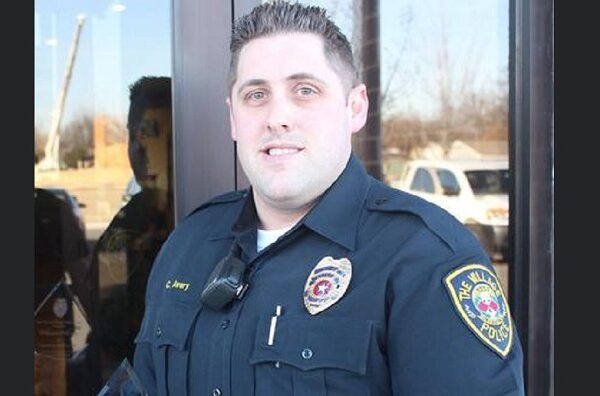 Prosecutors across America continue to play around with cops’ lives. The Village Police Corporal Chance Avery was first charged with murder and manslaughter for shooting a suspect armed with a bat. After a police lieutenant in a similar case had his charges dismissed, the judge also dismissed Cpl. Avery’s charges. Now, another judge has reinstated Cpl. Avery’s charges, and he will once again have to face a second-degree murder or first-degree manslaughter charges.

Here’s the story, as reported in August by KFOR News 4 Oklahoma, which is simple—or should be. Corporal Avery responds to a domestic violence (DV) 911 caller’s request for assistance to conduct a civil standby while Melissa Poor, who obviously feared her estranged husband, picks up some belongings. Her request is the result of a previous alleged DV incident with her husband Christopher Poor.

Christopher points at the officer with his right hand, (indicating he’s likely right-handed), and tells Avery, “You put that (expletive) [gun] away in my (expletive) house!” Then he switches the bat from his left hand to his right, one of his many overt pre-attack indicators. Then he moves toward Avery to only a few feet away, saying, “I will not put it down.” Cpl. Avery shoots Christopher in self-defense.

Also, if Christopher gets past the officer, he may go after Melissa. All the Monday morning quarterbacking about alternatives such as some magical “de-escalation” and less-than-lethal options are moot. Not that it matters to the media.

KFOR morphs from news reporting to editorializing—against the police. KFOR concludes, “At no point in the video, do you see Poor raise the bat or attempt to swing it at the officer.” This comment is dangerous, ignorant, and meant to bias the public against the officer.

Just before Avery shoots, Christopher’s right hand appears to begin raising the bat, which doesn’t matter because he could also spear or jab the officer with the bat. Suspects aren’t necessarily going to go all Ted Williams and swing for the Green Monster at Fenway.

As for less-than-lethal, Lawrence Lujan, writing at Police1.com wrote, “If you are going to deploy your TASER or another less-lethal tool, have lethal cover [an armed officer positioned nearby]! If not, reconsider the decision to deploy.” Tasers can fail for myriad reasons and can “fail to incapacitate…” a suspect.

People may also argue the officer should have had, or waited for, backup. Remember, a standby like this is normally a relatively low risk call to allow one party to collect personal items. With so many Oklahoma City metro area police departments suffering from staffing shortages, and for smaller agencies, generally, they may not have the resources especially for a non-emergent call.

It’s difficult for officers to ever “win” in these circumstances. People call the police because they fear for their safety and then admonish the cops for doing what was necessary—what they could not or would not do themselves. Melissa would not have called the police if she didn’t think Christopher was a threat.

On the video, a distraught Melissa says, “He was not going to hurt you.” Cpl. Avery responds, “Ma’am, he was coming at me with a bat.” A few moments later Melissa apologizes to the officer. “I’m sorry, sorry, I didn’t mean to be….” She pauses, crying, then adds, “He’s just so mean,” and “he wouldn’t have done this if he wasn’t drinking.”

Okay, let’s say you’re the officer in this situation. Not someone watching, re-watching, starting, and stopping the video while at your desk or sitting on your couch. You’re standing in that room. Are you going to bet your life “he was not going to hurt you?” You are a police officer. You’re pointing your gun at an armed suspect holding a baseball bat, he’s not dropping it, and he’s moving toward you.

Then the suspect’s not only not dropping the bat, but he’s also shifted the bat to a more aggressive position, and he’s advancing on an armed police officer. Are you supposed to bet your life he will not assault or kill you with that bat? Because that’s the bet you’d be making. Hoping he’s not going to hurt you is not a plan. Is that what society should expect from their police officers—inaction? Stupidity?

Even if you are not anti-cop, or even a police administrator, and you sincerely believe the officer should have done something else, or that you would’ve done something else, that does not mean Cpl. Avery didn’t do what he felt he had to do at that time based on his perceptions, training, and experience. You also have to answer the question: What, realistically, should/could he have done instead?

Yes, you may have perceived the situation differently. I may have, as well. But that’s only with the benefit of hindsight and studying the video—several times. Earlier in the video, it appears Christopher may be intending to put the bat down. Then he seems to get agitated at the officer’s necessary orders to drop the bat.

But the officer must be focused on the deadly weapon, first. Nothing happens until the suspect puts the weapon down. Second-guessing and 20/20 hindsight cannot be the basis for criminally charging and prosecuting an officer acting in the moment.

If you’re not the one in the position, it is impossible to feel what the officer is feeling, what stimuli are affecting his decisions. So many people, without police training and experience, feel other options are always available when incidents devolve within seconds to deadly force. That the officer should have done “something else.” Real life doesn’t work like that.

I look at Cpl. Avery’s situation, and I think, would I have done something differently? Maybe. But at the point Christopher advances toward him, retreat, is the only thing I can think of. If I do, my gun is drawn, I’ll have to move backward in a house I don’t know, as an angry man armed with a bat is coming toward me, and the man’s wife is somewhere out of my view. What if I stumble or fall? This is all going on inside a trained officer’s mind, even if he or she doesn’t consciously acknowledge it.

According to the AP, “Defense attorney Gary James told The Oklahoman that Avery had a right to use deadly force because Poor ignored multiple commands to drop the bat and continued to approach the officer.”

The Village Police Department (TVPD), admitting it was “shocked at the charges,” released this statement, “At this time TVPD supports Officer Avery, who has served his community as a law enforcement officer for the past eight years.”

In early September, Oklahoma County Special Judge Lisa K. Hammond correctly dropped the charges against Cpl. Avery. Judge Hammond ruled the prosecution hadn’t produced enough evidence to charge the officer with a crime. In other words, no probable cause (PC) existed. A celebration likely ensued at the Avery household. But, these days, especially for cops, the prosecution/persecution seems never ending.

Yes, Judge Hammond dismissed the charges against Cpl. Avery, but Oklahoma County District Judge Cindy Truong had different ideas. The Oklahoman reported Truong said “Hammond erred in dismissing the case….” Truong believes the “excessive force arguments ‘are questions for a jury to decide.’” But what about an instance where there appears to be no PC to believe Cpl. Avery committed a crime? The criminal justice system is supposed to stop at that point. Is she sending an officer to trial to determine if PC exists to send him to trial? What the…?

Judge Hammond ruled “‘the state failed to establish’ that a crime was committed.” Strangely, Judge Truong, despite overturning Hammond’s ruling, seems to agree with her. The Oklahoman reported, “Truong said Hammond had a sound basis to believe Avery didn’t violate the law but ordered Avery to be bound over for trial.” Churn that one over in your head. The judge that overturned another judges’ ruling admits the original judge was right but overturned her decision anyway.

Society asks cops to make judgment calls, and this was certainly one of those. It doesn’t matter if other officers would have taken different actions. This is what this officer chose to do when confronted by an alleged intoxicated, bat wielding DV suspect who refused to obey lawful police commands and advanced on an armed officer.

Cpl. Avery didn’t go to that home to kill anyone. He went there because a woman called for help. She called the police because she was obviously afraid he would become violent. He did. But when he directed his violence toward the Cpl. Avery instead of his wife, the husband suffered the consequences of his actions.

Now, the Oklahoma legal system is attempting to hold a law enforcement officer accountable for the consequences of a criminal’s actions. And part of this legal miscarriage is being perpetrated by a judge who acknowledges the officer may very well not have committed a crime.